What is the Biophilia Hypothesis?

The biophilia hypothesis is the belief that humans are genetically predisposed to be attracted to nature. It states that all humans inherently love the natural world.

This idea that we are drawn to and need nature was first put forth by a man named Edward O. Wilson in his book Biophilia published in 1984.

The idea that humans have an innate love and need for nature has been adapted to many different areas of study. The biophilia hypothesis has been used to support the idea that humans are healthier when they’re connected to nature and has even become popular within the movement of green design, reusing materials, and eco-friendly architecture.

Though at first the biophilia hypothesis put forth by Wilson was more aspirational than based in scientific fact, researchers are now finding there are health benefits to being surrounded by nature. I’ll explore the many health benefits of nature later in this article.

The Science Behind the Biophilia Hypothesis

From Frederick Law Olmsted, the designer of Central Park in New York City, to Edward O. Wilson, to Florence Williams, the belief that nature makes humans healthier is an enduring and fascinating topic.

Research has found that nature helps to lower levels of cortisol, the hormone typically used to assess stress levels, improve concentration, and heighten creativity. They’ve found that taking a walk in a park and even looking at nature through a window can improve someone’s health.

Nature not only improves health, it helps people to feel happier. 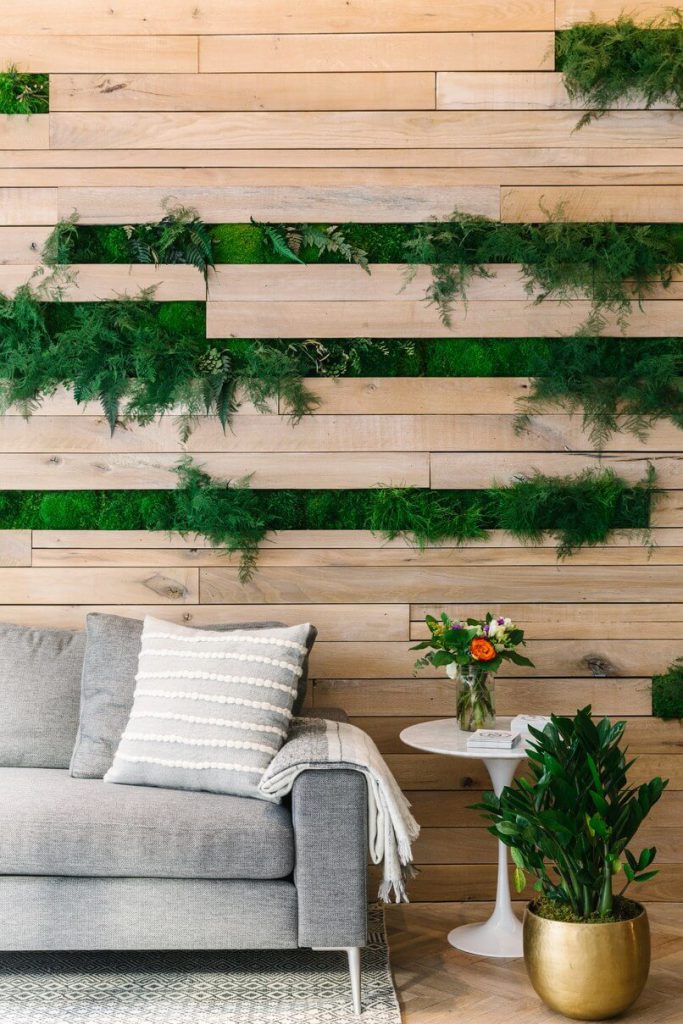 From Architectural Digest: A living wall at mndfl, a meditation studio.

Though science has come a long way to measure and prove the link between nature, health, and happiness — most of us intrinsically know that nature makes us feel good. No one needs to tell us.

Whether science proves it or not, the biophilia hypothesis has played a role in making biophilic design, green architecture, and eco-friendly buildings more popular.

The Biophilia Hypothesis in Architecture and Design

Many large companies are getting behind the idea of biophilic and green design. Everyone from Google to Amazon to Clif Bar are incorporating nature into their buildings to help employees to feel happier and healthier.

In addition to building a brand and selling products, companies are shifting focus to creating a workplace and ethos of holistic health. Bringing nature inside has also proven to improve worker productivity.

Biophilic design can be incorporated in many ways to the built environment. You might use reclaimed wood for the floors or wall paneling, plant a green wall, or add more windows to bring in natural light.

The tenets of biophilic design are simple, just an attempt to bring nature indoors for the health of the people inhabiting the space but, can lead design to new and unexplored possibilities.

Whether you add a green roof, a living wall, or just a potted plant here or there, plants are an easy way to incorporate biophilic design and bring nature indoors.

From International Living Future Institute: In Singapore, the Khoo Teck Puat Hospital brings nature and health to its patients.

Not every designer can go all out like in Singapore, but even something as simple as adding a green wall can bring the outside world inside. 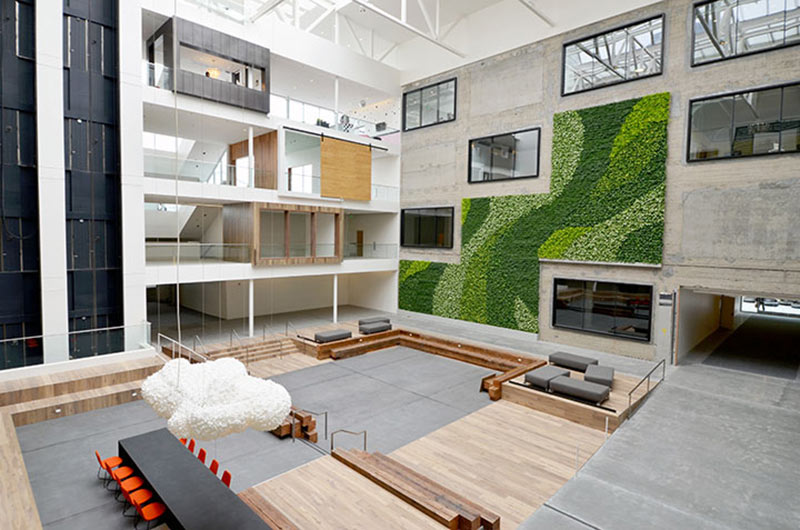 From Inhabitat: A green wall in Dubai.

Instead of building with metal, plastics, or man-made materials, use wood. Reclaimed wood is eco-friendly and beautiful. 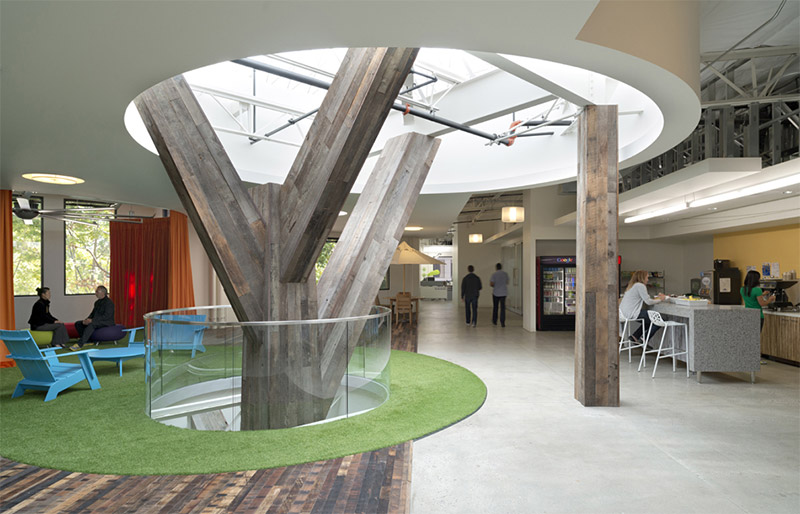 Many large companies, such as Google, have begun to incorporate nature elements into their office spaces through the use of reclaimed wood accents, flooring, and paneling. 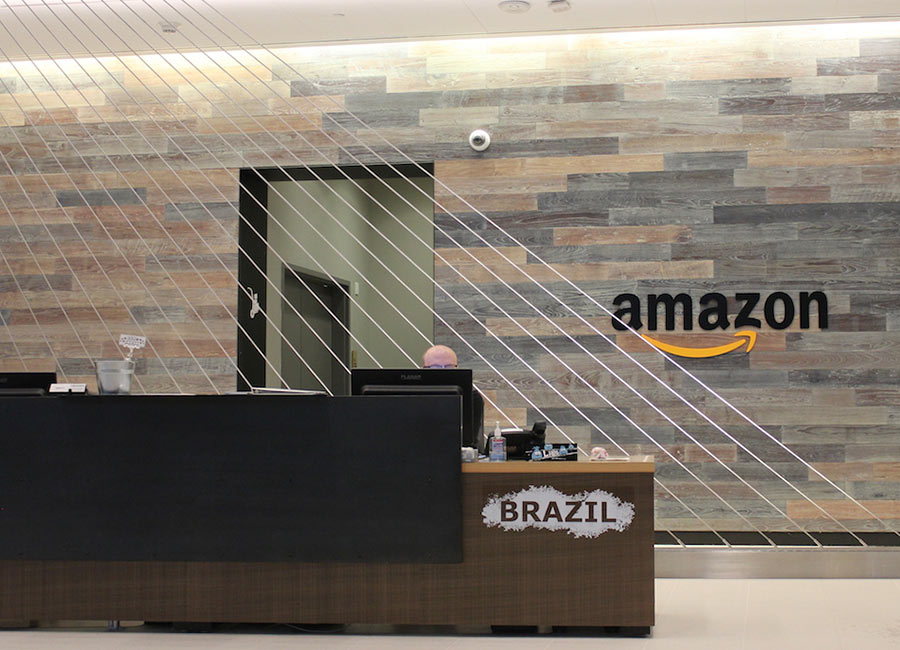 Designing a building around its location and orienting it to get maximum light and wind will not only make it more beneficial to those who work there, but also more eco-friendly. Windows let in natural light and if opened, fresh, outdoor air.

The biophilia hypothesis simply tells us what we already know: nature makes us happier and healthier. Biophilic design has encouraged architects and designers to bring the outside world inside by incorporating natural elements such as reclaimed wood, plants, and natural light into their design.