Toyota has long been a leader in sustainable practices in the auto industry – and that stretches far beyond the Prius. Touting a company-wide commitment from the top down, they have made great strides to reduce water consumption, materials waste, carbon emissions, and have even gone so far as to protect biodiversity and wildlife habitat. This environmental stewardship is a result of a larger production system – lean manufacturing. The term is based on Toyota’s system of eliminating waste and anything that does not add value, all while maintaining or increasing productivity. The recent opening of the One Toyota North American Headquarters just north of Dallas in Plano, Texas, hoped to take this principle one step further.

“One Toyota is a philosophy, a way of working together and a goal we must strive to achieve every day. It represents our highest potential for collaboration, innovation, productivity and service to our customers, and we achieve it when our goals and actions are perfectly synchronized as one company.” – Toyota 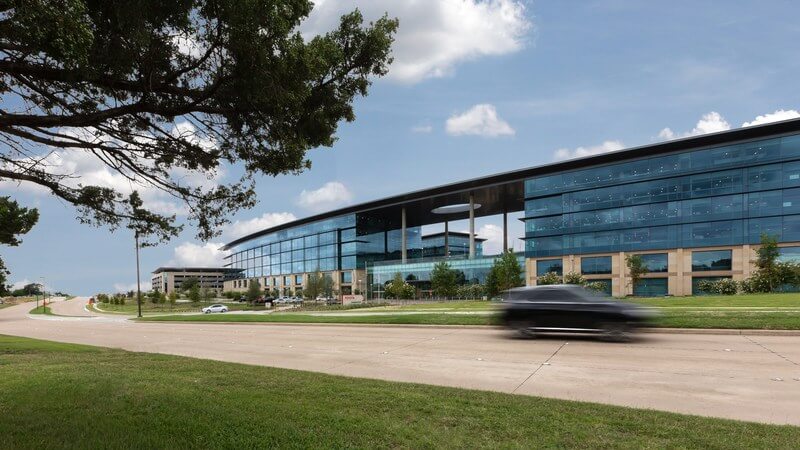 As a response to high growth in the US, the new North American HQ aimed at bringing together sales, manufacturing, and other key sectors into one central location – taking principles of their production process and applying it to the workplace. Faster, more efficient, unified, better. The challenge was, how could their new campus be designed in such a way that brought these lofty goals to reality? Enter Corgan. One of the leading architecture firms in the country, the Dallas office has worked with several high-profile clients on major projects – including 73 (and counting) LEED certified buildings. It was no question that they would be the ones tasked with creating a modern realization of Toyota’s long-held concepts on business and life.

The choice of design firm was made with confidence, but a firm is only as good as its people. This project – a 2.1 million square foot corporate campus – would need successful collaboration between experts in several different areas.

I spoke with Lauren Whitney, Vice President at Corgan, who was one of those key contributors. She acted as the project manager for the interiors, with duties including the liaison to Toyota and KDC (the developer on the project), overseeing financials, construction documents, leading the interiors project team, and overviewing the final design. After the grand opening, it appears she was integral in the successful execution of the plan. As part of a sustainability charrette and visioning sessions during the initial phases of the project, the Corgan team helped uncover major project goals, one of which was attaining LEED Platinum certification. Here’s how those goals were met from an interiors standpoint. 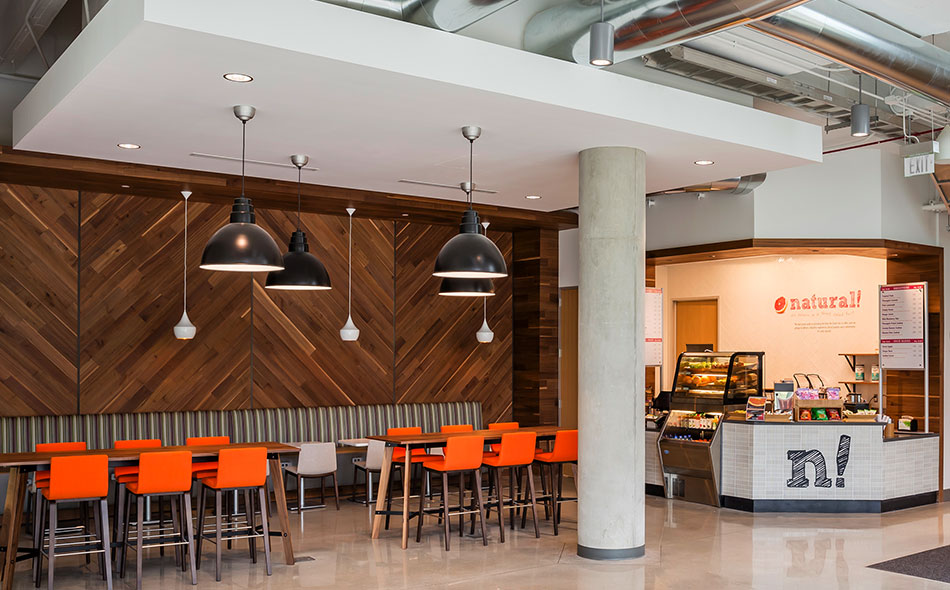 Chevron pattern was created using TerraMai’s reclaimed MC Walnut Engineered Paneling in one of the cafes.

While Whitney did not manage the sustainability portion of the initial planning, she was tasked with making sure that all specified products would meet the goals set in the initial charrette. A meticulous spreadsheet was kept, documenting every single product and the levels of VOCs, toxins, and other guidelines to make sure they would achieve LEED Platinum. Beyond that, she wanted to make sure that the healthiest materials were being selected. As a WELL AP – which focuses on human health and wellness – there was a much more holistic approach used that went beyond LEED. The impact on employee health, productivity, and happiness was a central design factor. How the space made people feel was just as important as how it looked. 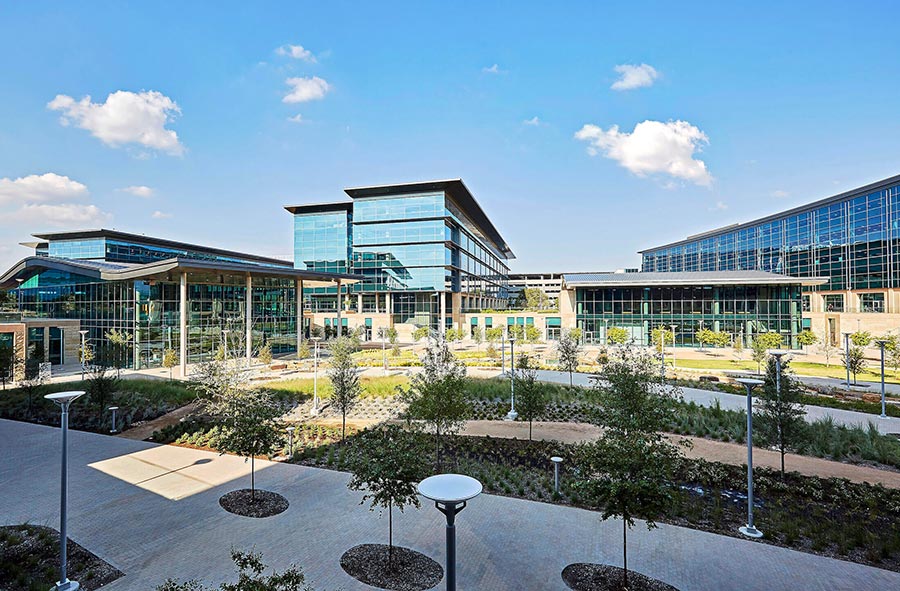 From Corgan: Toyota’s headquarters were designed to allow employees access to plenty of natural light and vegetation.

Toyota has a history of using recycled materials in their projects, and the same was applied here. Recycled and salvaged products are very low impact, eliminating the embodied energy from material extraction and production phases of the product lifecycle. Reclaimed wood walls and floors – created from discarded waste from veneer manufacturers – line the space. The use of FSC certified wood was an important part of meeting LEED requirements. The zero-VOC wood finish allowed for durable protection without harmful chemicals, and application of a low-VOC fire retardant meant wood could be used extensively while still meeting strict fire codes. In the dining area, countertops made from recycled glass – car windshields, bottles, old stoplights – were used to create a beautiful installation. The design team was able to find highly sustainable products while still meeting their design intent and budget. Typically, recycled material brings up thoughts of barn wood and antiques, but for those willing to look, there are numerous innovative resources out there diverting materials otherwise headed to the landfill.

TerraMai’s MC Walnut is sourced from industrial fall down and turned into beautiful reclaimed wood flooring and paneling.

Beyond VOC and recycled content – measurable quantities used to meet definite guidelines – the design team brought nature into the project through biophilia. The idea that human beings are instinctively drawn toward and connect with nature is a growing awareness – for aesthetic reasons as well as health and personal wellbeing. A key tenant in biophilic design is in using natural materials – wood, stone, terracotta – as well as a heavy use of plants. In the Toyota project, a large living green wall was used in the amenities area, bringing a sense of the outdoors to the space. Whitney calls it her “favorite design element from a sustainability standpoint.” The use of vegetation provides an aesthetic that can’t be matched in look and in its benefits to air quality. The interior finishes in general went beyond the numbers to provide the best possible space for the many workers who inhabit it. We spend 90% of our lives indoors, and Corgan made sure those countless hours would be as enjoyable as possible for Toyota employees. 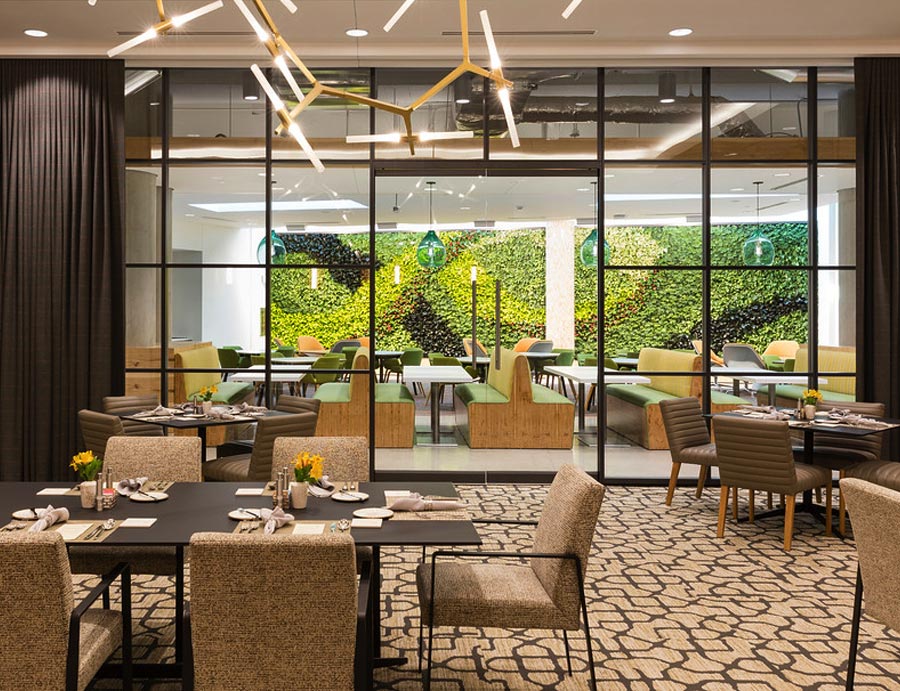 Encouraging Collaboration and the 50/50 Breakdown

Outside of the sustainability and LEED goals, the design intent of One Toyota Vision to foster innovation, connectivity and collaboration was perhaps the most difficult goal to verify as having been achieved. How to design for a client’s vision without the aid of measurable guidelines? This is where Whitney’s team was allowed the freedom to shine. The intersection between following guidelines and bending them in a new way is what separates the pros from the rest of the field. The team came up with a space dividing equation and tagged it the 50/50 Breakdown – allotting the space evenly between private work areas (workstations and private offices) and shared amenity spaces, where people can break away from the office and get a fresh perspective or collaborate with team members. For a 2.1 million square foot campus, this was no small task, but the team bought-in from the get-go. Whitney reiterates how walking around the site doesn’t feel as massive as the square footage sounds on paper. “It’s the ‘spaces between the spaces’ that really connect and unify the project, which will in turn encourage connection between team members and departments – the goal of creating this headquarters in the first place.” 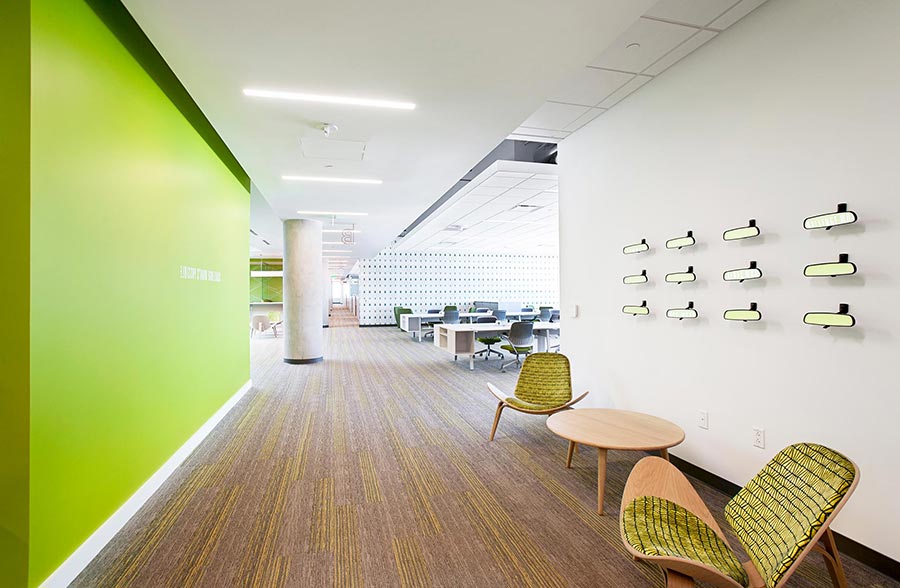 From Corgan: Toyota focused on creating open workspaces allowing the 19 departments plenty of opportunities to collaborate.

Coming up with this metric was a first for the design team, and close attention was paid to ensure the new guidelines were being met. It’s a key takeaway that can be used on future projects, which differs from the standard way of doing things. Rather than having a certain number of offices, a certain breakdown of different departments, the space was looked at as a balanced whole. While Toyota has sustainability metrics that can be met by clear and direct methods, Corgan came up with a measurable way to successfully meet goals that are a little more abstract – collaboration, communication, unification. In large part due to Corgan, Toyota’s vision was brought to reality, and the push for innovation – in business and in changing the world – continues to drive on. 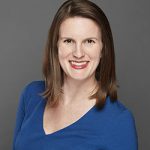 Interested in learning more about this project? Read our interview with Lauren Whitney, IIDA, Vice President at Corgan as she shares the successes, challenges, and learnings from this 2.1 million square foot corporate campus.