Change is a vital part of architecture and design. As occupant needs change and morph, designers constantly reevaluate and redesign the built environment to meet those needs. This is especially evident in the workplace. Over the years, the workplace has undergone a dramatic transformation from a windowless room of cubicles to bright, inviting spaces that inspire and rejuvenate. In this article, let’s take a look at how office design has changed and where it’s headed.

If there’s a design style that has dominated the workplace for decades, it’s the open office. The open office was developed in the early to mid-20th century in an attempt to create more spacious offices. This layout revolutionized the workplace by removing walls and other borders, and it was meant to improve social interactions between workers, which would theoretically boost everything from productivity to idea generation. Other variations followed, such as Bürolandschaft, a German school of thought that literally translates to “office landscape,” that prioritized informal layouts.

On paper, the open office seems ideal, but in practice, the open office has had its fair share of challenges. When the design first became popular in the mid-1900s, it didn’t quite take the form architects had hoped. Instead of hubs of innovation, open plan offices consisted of long rows of desks packed to the brim with workers. There weren’t any gains in interaction, either; if anything, this early iteration of the open office more closely resembled a factory. 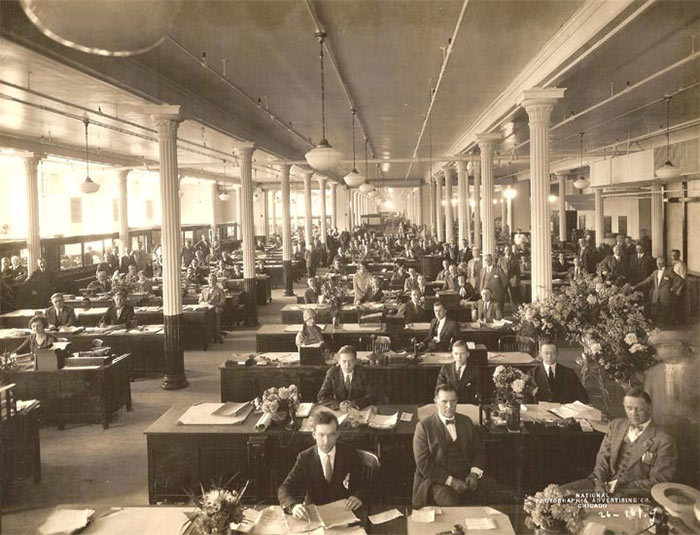 From the Electronic Engineering Journal: A vintage photograph of a mid-20th century open office

Throughout the 20th century, the open office continued to evolve, and while some of the initial issues were remedied, the design was still proven to be ineffective. Contemporary research from Harvard University looked at two Fortune 500 companies that switched to open office layout and found that workers spent 72 percent less time interacting face-to-face. Electronic communication shot up, but personal interaction decreased substantially. However, the open office was an important step in workplace design, and it led to the creation of what would be a hugely popular office design element: cubicles.

The Advent of Cubicles

Today, most people think of the cubicle as an outdated, old-fashioned relic of a past era. So it might be hard to believe that the cubicle was designed with the goal of empowering people. The cubicle was a response to the open office and claimed to solve some of its problems.

First, the cubicle brought privacy back into the office. Instead of working in tight spaces directly next to one another, workers could have spaces all their own. This also brought an aspect of personalization to the workplace. 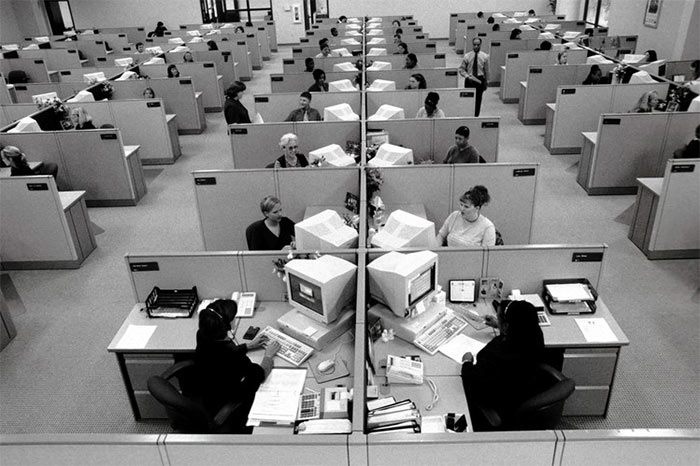 Second, the cubicle was designed to optimize productivity. Cubicle inventor Robert Propst told Fortune that he envisioned an “Action Office” that provided varying desk levels and multiple workspaces. Like the open office plan, this was excellent in theory but failed in real life. The Action Office became the cubicle, which was much smaller and cheaper. Since the workforce was experiencing a surge of new workers, the cubicle was a perfect way for businesses to minimize costs. 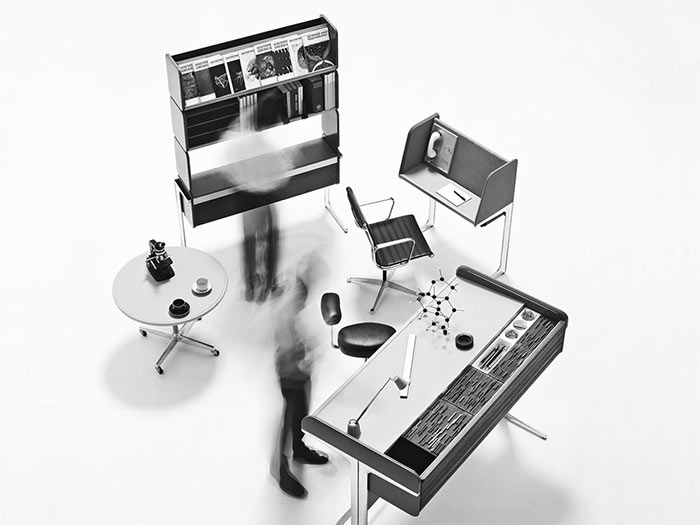 From Wired: A promotional concept image for the Action Office from 1964

For decades, “cubicle farms” took over the workplace. The image of a windowless room stuffed with cubicles is now part of popular culture, and for many, it’s become the standard depiction of an office building. Unsurprisingly, cubicles also lower employee satisfaction and productivity. Even Propst himself was adamantly against the cubicle. In addition, since cubicles were made with materials that contained high concentrations of volatile organic compounds (VOCs), they made workers sick. Over time, it became clear that cubicles weren’t the answer, so designers looked for a better, healthier solution.

The Rise of the Biophilic Office

Today, occupant health in the built environment has become a top concern for architects and designers. The average American worker spends 90,000 hours at work throughout their lifetime, so it’s important to design the office to promote health and wellness. In addition, offices have historically been under optimized for human health. Cubicles aren’t the only parts of offices that make workers sick––many factors can detract from worker health and result in a condition such as Sick Building Syndrome (SBS).

This is where biophilic design comes in. This philosophy of placing nature at the center of a building’s design has gained attention for its numerous health benefits, including reduced stress and lowered blood pressure. For many designers, it’s the design approach of choice for any type of commercial environment. It works well with a variety of layouts, transcending any single design approach.

Material selection is a critical part of biophilic design. In the past, illnesses like SBS often occurred because of the toxic materials used in interior design. These high-VOC materials release chemicals like formaldehyde and other pollutants into the environment. Today, architects carefully handpick and source materials that contain little to no VOCs.

Reclaimed wood is a material that designers can reply on, and it offers unique biophilic benefits. Its rich appearance and vivid textures help to connect people with nature in a way that no other material can. Perhaps most importantly, it enhances occupant wellness. It relieves stress and encourages interaction, which makes it an ideal material for the workplace. And thanks to the zero to low-VOC products we use to finish our reclaimed wood, it won’t be making anyone sick. 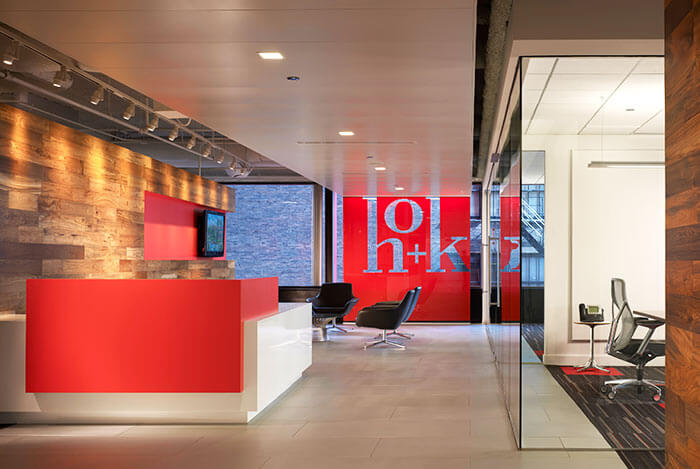 Biophilic design is often used to complement flexible workspaces. Unlike the open office or the cubicle farm, the flexible workplace is designed to be modular. Workers are able to modify their surroundings as they need, so at any given moment the same space could be used for a presentation, a solo work session, or a private meeting. Mobile furniture, adjustable surroundings, and multi-purpose furnishings help occupants get the most out of a flexible space. When biophilia is infused into a flexible workplace, it’s an ideal combination of form and function that is inspiring office design today.

Every business has specific needs, and of course budget, to consider when making office design decisions. Before latching onto a trendy (or dated) office concept, it is best to consider different worker needs and personality types. Part of the biophilic design process is polling occupants for their input. Some predict the end of the desk and chair and a trend toward all couches but according to Inc Magazine, “We are naturally territorial creatures with a need for categorization, rules and structure. We also like to have a place to put our stuff, even if it’s just some notepads and a coffee mug.”

The modern office has come a long way since the open office plan of the 1950s. Rows of desks and cubicles have been traded for green building materials and inspiringly natural offices. Architects and designers are constantly innovating to make the office a better place to be. It’s a tall task to create a dynamic, collaborative workplace that addresses the many different working styles and situations while mitigating noise and other distractions. If done right, occupant productivity and worker happiness increase. A biophilic design approach is highly worthwhile when looking to foster a healthier office environment.